The Ace of Space is one of the amenities in Cosmo's Quickstop. Like all amenities, it can be installed along the outer wall of the Quickstop's large, central room. In campaign mode, the Ace of Space becomes available after the 6 dock layout is obtained. 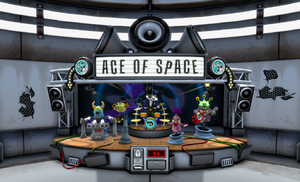 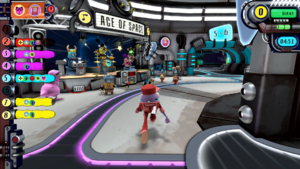 The Ace of Space is a utility amenity that temporarily distracts customers, preventing them from losing patience while it plays music. This amenity does not require any maintenance and it will not appear on a customer's task bar. Instead of making profit, it costs money to use the Ace of Space. The lowest amount you can pay is $5, but the price shoots up after the band starts playing. The price will slowly go down to $5 again, but each time you activate the band, the price increase is higher than before, thus taking longer to reach its minimum price again. The Ace of Space can be activated even if you cannot afford the displayed price, but your profit will be negative. To activate the Ace of Space you must stand in front of it and press the activation button shown on the Tip Window. It can also be activated remotely with an upgrade.

A Snappy Rhythm - Adding a rhythm guitarist to the band makes the tune much more enjoyable. Customers will actually regain patience while the song plays!

Music on Demand - Installing a remote control lets you start the band from anywhere.

Extended Track - Playing the tune longer will hold the customers' attention longer too. Some wonder if the song will ever end. I sure hope it does!

Encore! - Adding a pyrotechnic finale to the performance will hold customers' attention for even longer! That's the power of music (and fire)!

Subliminal Ear Worms - Adding subsonic tones to the music makes the song get stuck in customers' heads. Any customer who hears it will never lose patience again!

This animatronic band known as Ace of Space was all the rage several decades ago. It was once featured prominently as the centerpiece in many pizza franchises across the galaxy. However, the band has since faded into obscurity due to the fickle attention spans of its fan base and the band’s inability to adapt to the constantly evolving music scene. Now these heavily discounted machines are found in scrap heaps more often than dining establishments. Those who still remember the good ol’ days are inescapably drawn to the nostalgic tones of their instruments in the rare opportunities that the band is encountered.

Giuseppe is the leader and vocalist of the band, using his trumpet-like proboscis to deliver entrancing lyrical tones. Tammy the tambourinist keeps the beat with her delightful rhythmic jingles. Gorf the space pig plays crunchy riffs on his bass while Froofroo jams on her drums and hi-hats. Emertron's synthesizer provides a rich soundscape upon which all the other instruments are overlaid. When combined, the musical talents of these robots are enough to distract even the most impatient customers from their immediate desires.