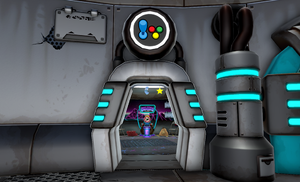 The Arcade is one of the chores in Cosmo's Quickstop. Like all chores, it is permanently installed in your Quickstop. The Arcade becomes available late in the campaign mode and exists only in the 8 dock floor plan. It is located on the south side next to the blue docks.

Customers will permanently lose patience more slowly once the Arcade is unlocked. Also, while it is in working condition it provides extra profit if you maintain it. The Arcade does not show up on a customer's task bar, therefore a customer cannot be failed by neglecting the Arcade. You must periodically empty coins from the arcade machines to collect profit and keep it in working condition. If a machine becomes too full, it will display an out of order sign and it will not be able to generate profit.

To empty the coins, you must enter the Arcade and hold down the button that activates the vacuum while facing one of the machines. Coins will be sucked out toward Morvin and the machine will stop emitting any coins once it is empty. Collecting coins will immediately generate profit and any coins left in the machines when the round ends will not be counted.

All the upgrades for the Arcade install an additional machine, up to 5 in total. This allows the Arcade to fill up with more coins over a slower period of time, which keeps the Arcade working longer between maintenance. The passive patience buff is also improved for each upgrade purchased.

Whack A Sack - Installing this popular sack punching game will provide a small patience boost to customers. Nothing is more satisfying than a whack to the sack!

Squeeb Jammer - Installing this “Pro Edition” re-release of the classic squeeb smacking game will add a small boost of patience to customers.

The enthralling lights and noises emitted by this popular attraction are irresistible to those who love to test their skills in any number of coordination-intensive arcade games. The officially licensed gaming cabinets featured in this module are explained in more detail below.