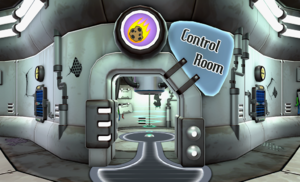 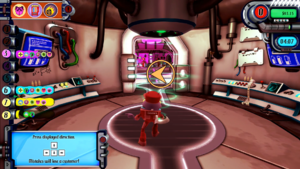 You must periodically run to the central Control Room and dodge asteroids when the asteroid alarm activates. You must enter the corresponding input displayed on the hologram in the middle of the room. Incorrect inputs or neglecting to dodge before the alarm ends will result in the loss of a customer and will reset your Combo Meter. This task does not generate any profit, but with upgrades it can provide a combo bonus.

Magnetron Deflector - Installing a magnetic deflection device will repel metallic asteroids around the Quickstop, reducing the frequency of impact alerts even more.

Pocket Rocket - Installing a missile defense system will allow you to remotely destroy one asteroid per day. Use it wisely!

Glitch Streamer - Live-streaming your asteroid dodging skills will immediately fill your combo meter after avoiding an impact. Remember to tip your streamer!

Asteroids are frequently encountered along busy thoroughfares like Route 66 Million. It's theorized that centuries of busy traffic flowing through the same route has created an artificial gravity vein that attracts debris from deep space. To combat this issue, structures built along interstellar freeways are equipped with asteroid avoidance procedures. Destroying asteroids with blasters or missiles should only be done in emergency situations since pulverized chunks of debris could unpredictably collide with nearby bodies, including other asteroids. This could result in a cascade of collisions, strewing so much dangerous debris that the area would be uninhabitable.

Asteroid detection systems will alert the operator of a predicted collision with plenty of time for them to respond with evasive maneuvers. Failure to avoid a collision will violently rock the space-structure, causing a docked vessel to get dislodged from its landing pad. Hull breaches do not occur from typical asteroid impacts, but can leave noticeable cosmetic damage. With the popularity of live-streaming over the galactic datanet, some operators broadcast their asteroid dodging performance to the masses in an effort to accumulate clout and cryptocurrency.