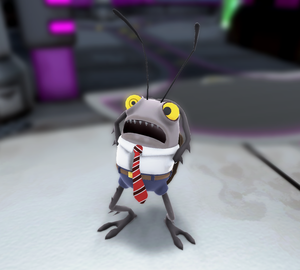 Business Bugs are one of the 3 species of customer that can visit the Quickstop from the beginning of the game. Other species are "unlocked" through progression in the campaign.

Business Bugs are aptly named since that’s what they do best... business -- mindless, soul-crushing business! Hailing from the planet Alpha 93, this species is responsible for handling most of the galaxy’s boring and stuffy office work. Ranging from clerical work and accounting, to marketing and e-mail spamming, their skill sets tend to limit their existence primarily to high-rise office hives where they spend their days hunkered down in a cell-like cubicle.

Business Bug society rewards members who adhere to the status quo and don’t ask many questions. It is a civilization that revolves around pyramid hierarchies, an 80 hour work week, and awkwardly choreographed, unenthusiastic social interactions. Seldom coming up with any original thoughts of their own, they quickly succumb to mental breakdowns when not provided with some sort of task from a superior.

Because of their redundant tendencies and love for all things bureaucratic, their planet proudly hosts the principal access portal to the Space Government Sub-Dimension. The imposing structure is featured on all pieces of galactic currency and represents the holy bond between a personally invasive government and rampant, unchecked capitalism.

The chief anchor of the Galactic News Network (GNN) is a Business Bug.