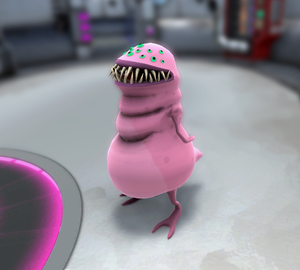 Chompies are one of the 3 species of customer that can visit the Quickstop from the beginning of the game. Other species are "unlocked" through progression in the campaign.

Chompies may look menacing, but they are really more bark than bite… or maybe it’s the other way around. Either way, don’t let one of your limbs get too close to its face!

Chompies are probably best known for their insatiable appetites and their ability to wolf down just about anything, edible or not, in less than a second. If their appetite is not satisfied quickly, they can go berserk, flailing their arms and brandishing their gaping maws while gurgling and salivating profusely. It’s certainly not a pleasant sight!

When they aren’t hungry, chompies can actually make for excellent company. They love to laugh almost as much as they love to eat and will bust out guffawing at even the lamest knock-knock jokes. Chompies are the primary consumers of goods and media in the galaxy. Their tastes in food, novelties, and entertainment is almost completely indiscriminate, making them the default demographic for most industries.

Chompies come from the planet Gastroid 6, whose surface is primarily composed of fast-food franchises and the parking lots that exist between them. It is mandated in their society that each member must serve drive-thru duty at a fast-food establishment for a minimum of 5 years after coming of age. It is considered a great honor as it is absolutely necessary in maintaining their way of life as a species.