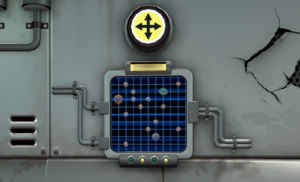 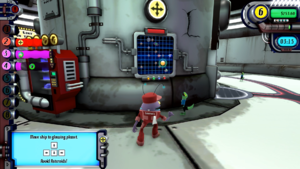 Giving Directions is one of the chores in Cosmo's Quickstop. Like all chores, it is permanently installed in your Quickstop. Directions are given to customers at map panels, which are available from the beginning of campaign mode and are found in all of the Quickstop's floor plans. In the 4 dock floor plan, there are two map panels, one each wall to either side of the control room door. In the 6 and 8 dock layouts, there are 4 maps found along the outer walls of the control room.

Customers who want Directions will walk to the nearest unoccupied map panel and wait there with a Directions icon over their head that is color coded to their corresponding dock. You must approach the map panel and guide the rocket ship in the center to the glowing planet without hitting any asteroids. Hitting an asteroid will reset the rocket to the center of the map.

As long as a customer is waiting at the map, they can lose patience. If all the map panels are occupied by a customer, any other customers who want Directions will stand nearby until a panel is available. They will also lose patience in this state.

Giving directions does not make much profit until it is upgraded. Both Kickback upgrades give an opportunity for you to drive the rocket through a randomly placed marker on their way to the glowing planet. Passing through the marker and completing the minigame adds a relatively large reward of bonus profit.

McBitey's Kickback - Sending a customer to a McBitey's restaurant on the way to their destination will earn you some extra profit. Aren't brand deals great?

Triassic Land Kickback - Sending a customer to a Triassic Land theme park on the way to their destination will earn you even more profit! AREN'T BRAND DEALS GREAT?!

Strange Frequency - Fiddling with some knobs on the map's ultrasonic transmitter somehow reduces the number of stationary asteroids in the area. Strange...

Really Strange Frequency - Fiddling with more knobs causes rips in spacetime! Passing the edge of the map will teleport the customer's ship to the other side. Really strange!

Ever since the Artificial Intelligence Union went on strike, asking for directions has no longer been a thing of the past. Previously automated navigation systems became totally reliant on manual commands, making course correcting difficult for all but the most seasoned space traveler. Most commercial establishments are happy to offer their navigation services for a small fee and some have even entered brand deals with other enterprises to mutually boost their customer bases.

The map panels used to charter space flights are constantly updated by an ultrasonic transmission device that measures the echo of spacetime waves bouncing off objects vast distances away. The complicated wave forms emitted from the device can cause some strange disturbances to local spacetime when tuned to certain frequencies. Some frequencies have been known to repel certain elements found in asteroids, while others open unintended wormholes that can be exploited as shortcuts between interstellar destinations.