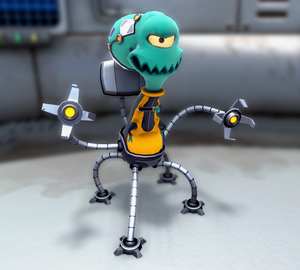 Dr. Kelvin Quazar is the owner and inventor of Quazar's Convenience Cube, a completely automated drive-thru that aims to replace every convenience store in the galaxy. He recently set up shop in a largely vacant strip along Route 66 Million, right next door to Cosmo's Quickstop. He plans to oust Cosmo from his comfortable position as the area's only gas station and will do whatever it takes to dominate the market. Quazar frequently appears throughout the campaign to cause trouble for Cosmo and his nephew. His sabotage tactics include sneaking a wild squeeb into the Quickstop, goading Cosmo on galactic television and installing a time-altering virus on the Quickstop's computer.

Armed with a cybernetic brain and a doctorate in quantum cube-ology, Dr. Quazar has been tirelessly developing breakthrough technology that will allow him to dominate the galactic marketplace. His prototype, Quazar's Convenience Cube, has been branded as a one stop drive-thru with unparalleled speed and accuracy. He plans to prove his concept by running Cosmo's Quickstop out of business and expanding his franchise to take over every convenience store in the galaxy. Completely negligent of business ethics, Quazar is keen to resort to underhanded tactics to tip the scales in his favor. He will do whatever it takes to realize his dream of a galactic cube-based economy with him at the center of it.