The Lint Ball is one of the amenities in Cosmo's Quickstop. Like all amenities, it can be installed along the outer wall of the Quickstop's large, central room. In campaign mode, the Lint Ball becomes available after the 6 dock layout is obtained. 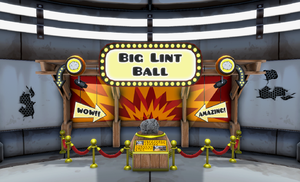 The Lint Ball is a utility amenity that can provide several powerful bonuses once upgraded. Neither you nor the customers can interact with the Lint Ball. It is a passive amenity that doesn't generate any profit directly. While it is an investment to level up, the Lint Ball can provide higher combo levels, extra time and bonus tip money.

Dust the Shelves - Adding the lint you collected from dusting makes the ball a bit bigger. Customers are so impressed that you can extend your open hours by 30 seconds!

Vacuum the Carpet - Adding the lint you swept from the rug makes the ball even bigger. Customers are so impressed that you can extend your open hours by 30 more seconds!

Brush the Space Cat - Adding the lint you picked from the cat brush makes the ball quite a bit bigger. Customers are so impressed that you will start with a combo level of 1!

Do the Laundry - Adding the lint you found in the dryer makes the ball much bigger. Customers are so impressed that you will start the day with a combo level of 3!

Flush the Vents - Adding the lint that was clogging the Quickstop’s air ducts makes the ball bigger than ever! It’s so impressive that you will make double the money from tips!

This gigantic ball of dust and debris is one of Cosmo's most cherished possessions. He's been collecting it ever since his larval phase and has only recently thought of displaying it for the public. It's held together by a miniature gravity well and its electromagnetic field readily assimilates any small particles that drift nearby. The the off-putting, yet novel item has won a few awards in the local fair, giving Cosmo the idea of leveraging it as a tourist attraction. Cosmo has even constructed an elaborate display booth and a commemorative plaque for posterity. He hopes it will someday claim the record as the biggest lint ball in the galaxy.