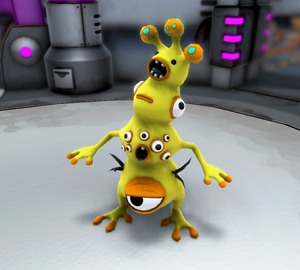 Nogwobblers are a species of customer that will begin to visit the Quickstop after completing the Nogwobbler Day challenge in campaign mode. 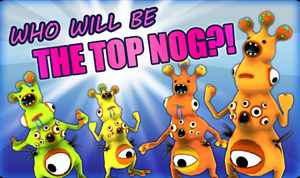 News Ticker Text - Millions of Nogwobblers are gathering to compete in a local headbanging competition. Their split personalities make them demanding patrons, so be prepared to complete 4 tasks for each customer.

Nogwobblers are without a doubt, one of the most peculiar species found in the galaxy. Their bodies are composed of a stack of independently functioning heads which work together as a single entity. Each head has a will and personality of its own making Nogwobblers a confusing being to interact with. The species originates from a small tropical moon known as Glorbus, which orbits the giant gas planet of Malorbus. Many refer to the moon as Glorbus-Malorbus because it is a fun thing to say.

Nogwobblers are all clones of each other. Each Nogwobbler starts its life as a single head which budded off from the top of a fully grown individual. The juvenile single-headed Nogwobbler will gradually sprout more heads until they are stacked 4 heads high, at which point the budding process will repeat.

Each head on a Nogwobbler serves a distinct function. The bottom, and oldest head, is used for walking and must carefully concentrate on balancing the precariously stacked noggins above it. The second head is used to interact with other beings and objects since it is the only head equipped with arms and hands. It is also used for speech and food consumption. The third head’s purpose is unknown as it doesn’t appear to do anything other than hum and drool. The top head supports the budding polyps that Nogwobblers use to replicate themselves. It also mindlessly screams for no particular reason.