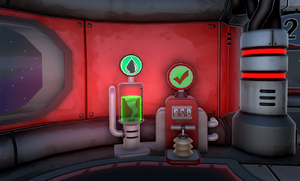 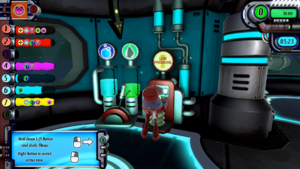 Upgrading the Refill Pump will introduce a 2nd tank that holds liquid oxygen. If the customer wants oxygen, you must switch the pump to empty the blue tank until that is empty as well. Similar to fuel, the progress of refilling oxygen is displayed by a blue ring around the Refill icon in the customer's task bar. To multitask, you can start emptying one tank, go tend to another task, then come back and switch to emptying the other tank.

Under Pressure - Increasing the pressure in the piping system makes the pump refill faster!

Morning Stretches - Doing toe-touches every morning makes your pumping motion more efficient. Now you don't have to pump as much to build pressure!

It Tanks Two, Baby! - Adding a second tank for oxygen refills means you can charge a lot more for this service. Just make sure the correct tank is activated!

Oval Ring Gaskets - Upgrading the seals in the piping system lets it operate at extremely high pressures. Now the pump refills faster than ever and you don't have to pump as much!

Spring Into Action - Installing spring-loaded bellows makes each pump even more efficient. Now you barely have to move a muscle to get the pump started!

Auto-Pump - Replacing the manual pump with an air compressor means you can start refills with the press of a button! (but don't forget to switch tanks as needed!)

These common fixtures are found in gas stations across the galaxy and are designed to quickly replenish star-faring vessels on long voyages. A computer-guided nozzle automatically extends to the awaiting ship's fuel tank and relies on the operator to build pressure in the pump to power the dispensing process. Fancier stations are typically equipped with a motorized pumping system that can be started with the touch of a button. Such luxury!

Nearly all service stations are well stocked with a liquid rocket fuel called tetra-glorpazine. This ubiquitous fuel source is used to power most space craft and is produced by condensing glorp fumes into a liquid propellant. While all star ships are equipped with an equal exchange air scrubbing system, the oxygen tends to get stale and stinky. Therefore, many upscale establishments also offer liquid oxygen for customers who need a breath of fresh air.