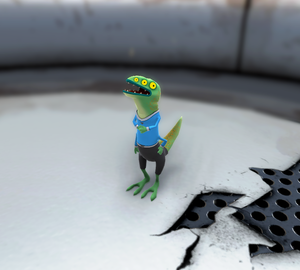 Reptilians are a species of customer that will begin to visit the Quickstop after completing the Reptilian Day challenge in campaign mode.

Reptilian Day is one of 6 customer challenge days that occur in the campaign mode. Each one focuses on a newly introduced customer species that will begin appearing regularly in the Quickstop once the challenge day is completed. During a customer challenge day, only one species of customer will spawn and will feature a mechanic that is unique to that species. However, this mechanic will only apply during the challenge day. For example, every customer in Reptilian day will move very quickly and spawn 5 customers per ship, resulting in a very hectic round. 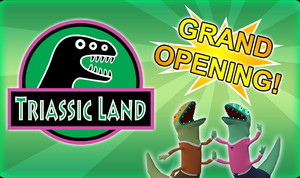 News Ticker Text - Despite numerous protests from dinosaur safety advocates, a new Triassic Land theme park has opened nearby, resulting in a surge of Reptilian activity in this sector. These fast moving lizards are known to travel in large familial packs, therefore a hectic day should be expected.

Reptilians were sold on the intergalactic pet market for a brief period, before it was determined that the species was not only sentient, but also prone to emitting the most obnoxious cry when upset. They are naturally curious and tend to get into things they have no business tampering with, often to a disastrous effect. In addition to being annoying, these noodly creatures tend to travel in large familial packs, which further magnifies their intolerability.

Their homeworld, Cletus 8, is infested with dinosaur-like creatures and lush vegetation. With few natural resources to trade, the inhabitants of this world primarily export dinosaur-themed amusement parks known as Triassic Land. The parks invariably go awry in a predictable, but nonetheless exciting manner. These parks are a huge money-maker in the galactic entertainment industry. They are so popular that a movie and several sequels were made based on the parks as well as a reboot, a toy franchise based on the reboot, and a syndicated cartoon series based on the toy franchise.