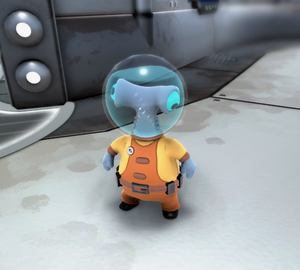 Sharkies are one of the 3 species of customer that can visit the Quickstop from the beginning of the game. Other species are "unlocked" through progression in the campaign.

Sharkies come from the dwarf planet, Pluto, located along the outer reaches of an otherwise unremarkable solar system. Their civilization is situated at the bottom of a cold, subterranean ocean. They have only recently discovered the technology that allows them to break through to the planet’s surface and survive. The frontier of space is still a new and wondrous experience to most Sharkies, making them enthusiastic tourists.

Not much is known about Sharky society, except that all of its members seem to worship an individual known as Hamiltron Snorkeltooth. Apparently, this very special Sharky was the inventor of the life support suits that allow the species to survive outside of their native ocean. The original patent for the suit is considered a sacred document since it was instrumental in liberating the species from their dark isolation.

While they look simple, the life support suits worn by the Sharkies are actually a very complex engineering marvel. The briney solution they require to breathe is continuously rejuvenated and calibrated for optimal conditions. So optimal in fact, that most Sharkies would rather leave the suit on, even while in their natural habitat.