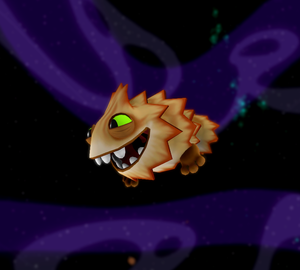 Morvin's space cat, Quark appears in various places in Morvin's room. He can usually be found sleeping or rubbing his face on furniture. He's been known to occasionally squirm his way outside of the Quickstop to frolic in the vacuum of space. Because he is a space cat, this harsh environment doesn't phase him.

An ordinary pet found in households throughout the galaxy, the ever popular space cat is cuddly, compact, and cute as a button. The species we all know and love today is a domesticated form of the abominable space tiger. Through generations of selective breeding and just a pinch of genetic manipulation, these creatures are a far cry from their vicious sabre-toothed ancestors. Due to their playful natures and soulful eyes, videos and pictures of space cats dominate galactic datanet forums.

Space cats are easy to glorp-train and their tendencies to damage furniture can be minimized as long as they are provided with alternative items to gnaw and drool on. Although extremely common, there are several mysteries surrounding the species such as how their disconnected paws are able to operate. Most theories suggest that it probably involves magnets or something, but who cares? Just look at how cute it is!