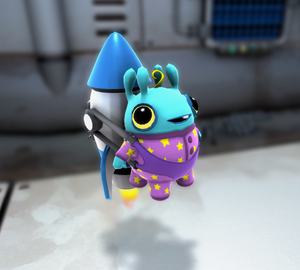 Star Babies are a species of customer that will begin to visit the Quickstop after completing the Star Baby Day challenge in campaign mode. 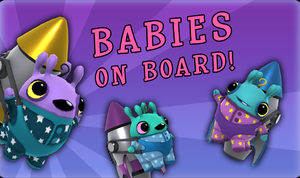 News Ticker Text - Millions of restless Star Babies are awakening from their 100 year slumber to toddle across the galaxy in search of new binkies and baubles. These jet-propelled infants are infamous for their frequent glorping. As such, janitors should be prepared to clean their facilities frequently.

Star Babies appear to be innocent little toddlers, but don’t let looks deceive you. Most Star Babies will manipulate other beings with their cuteness in order to get whatever they want. And when that fails, they will cry and pout until they have their way. Star Babies can’t walk very far without getting tired and cranky, thus each Star Baby is strapped to a small rocket that propels them from place to place.

Star Babies are easily distracted by bright and colorful things that jingle or blink. The surface of their home planet, Gerberticus, is littered with countless trinkets and baubles hoarded by Star Babies throughout their centuries of exploring the cosmos. Few other lifeforms exist on this planet aside from lollipop trees and gumdrop bushes, which the Star Babies munch upon to achieve euphoric sugar highs.

Star Babies are a generally peaceful species as long as they have their naptime and a warm bottle of milk nearby. However, if these conditions are not met, they can throw destructive tantrums that are something to be reckoned with. It has been calculated that the destructive force of one hundred angry Star Babies would be enough to destroy half the galaxy, therefore the Galactic Government makes a constant effort to keep them placated through their “Nappies and Bah-bahs” program, which supplies the planet with a constant supply of lullabies and infant formula.