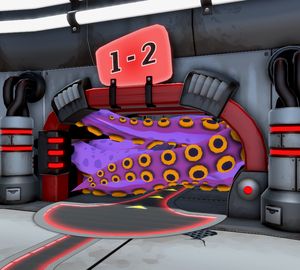 The squeeb is a mass of tentacles that infests Cosmo's Quickstop and will periodically block passage between the central room and one or more of the docking arms. The squeeb first appears in a cut scene after the player unlocks the 6 dock layout in campaign mode. The squeeb starts as a baby hatch-ling and doesn't prove to be much of a threat until a few days after its infestation. From this point forward, there is always a chance that the squeeb will emerge to block access to one of the docks, forcing the player to navigate around it using the teleporters. Typically, the squeeb only blocks one docking arm at a time, but can block all except one during the Squeeb Boss Challenge and the Revenge of the Squeeb Time-Loop Challenge.

Squeebs are a fairly common nuisance in all corners of the galaxy and while there are many different species of squeeb, they all share the same basic features and tendencies. A full grown squeeb can boast as many as 1000 tentacles, which it uses to probe nooks and crannies in search foodstuffs or mates. They originated in the asteroid mining outposts on the outskirts of the Glorbus system and because of their invasive nature, they have quickly spread and adapted to every quadrant that has imported raw material from the bountiful asteroid belt. Once established in their environment, baby squeebs grow and mature very quickly and can become quite aggressive during their puberty phase. Squeeb pheromones can easily trigger their aggression, even if the squeeb is normally mild tempered. Some less common species like the one in the Quickstop are protected by the Galactic Conservation Society. Any attempts to disturb or relocate these species will be met with steep fines. In lieu of conventional extermination methods, squeebs can be rendered docile by throwing them a festive party.